Well we said that the Antonov was the final movement for Exercise Wallaby 2015 but we were wrong! Republic of Singapore Air Force (RSAF) Lockheed C-130H Hercules '734' was noted arriving into Rockhampton on Tuesday 1 December.

Local plane spotter Kayanne H captured a couple of photos of the Herc after it was parked in front of the Rockhampton Air Traffic Control tower where it looked to be staying for the night. 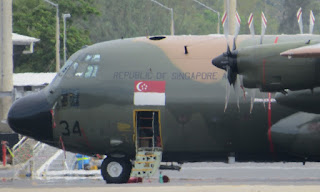 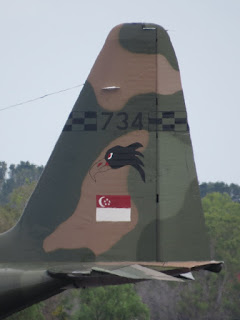 And it did stay for the night with the RSAF Hercules '734' noted departing Rockhampton Airport for Darwin early on Wednesday 2 December as "Singa 9598".

I am suspecting that this will be the final movement associated with the Singapore Armed Force's Exercise Wallaby 2015.

I'm told that the remaining RSAF F-15 and F-16 fast jets and Boeing KC-135R refuelling aircraft that have been based in the Northern Territory have also returned home to Singapore.

All photos taken by Kayanne Hardsman  ©
Posted by Damian F at 7:53 AM