As well as all the Virgin Australia jets calling into Gladstone Airport, a smart little corporate bizjet was also spotted visiting in the industrial city on Tuesday 1 December in the form of Sundown Pastoral's smart little Hawker Beechcraft Hawker 900XP VH-EVF. 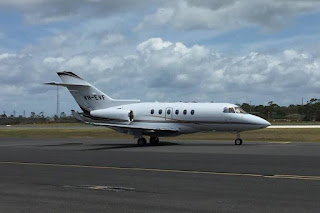 It looked to touch down early in the morning from its Gold Coast base and departed back to there about mid-morning.  Local aviator and follower of the CQ Plane Spotting Blog Terry P was on hand to capture a quick photo prior to VH-EVF taxiing out for departure.  He also captured a nice video of it departing Gladstone's Runway 10 back to the Gold Coast.


Sincere thanks to Terry for allowing us to share his great photo and video!

Photo and video taken by Terry Purcell  ©
Posted by Damian F at 10:03 PM