It was spotted early on Thursday parked 'nose-in' into the Royal Flying Doctor Service (RFDS) hangar at Rockhampton Airport after it had actually arrived from Townsville the previous day on Wednesday 2 December presumably operating its usual three-times-a-week prisoner transfer flights up and down the Queensland coast. 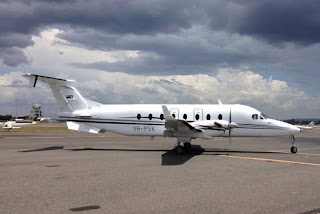 Rockhampton Aero Club member Paul T captured a photo of VH-PSK at Rockhampton Airport as it departed and then later returned on what looked to be local test flight.