Over the last week or so, I've noted a few more 'East Coast' parachuting aircraft ferry North and South through some Central Queensland Airports.

On Saturday 26 November, Skydive Australia (Skydive the Beach Group) Cessna 208 Caravan VH-OAI was noted heading South from the Whitsunday Airport at Shute Harbour to Roma and the Illawarra Regional Airport at Woollongong. 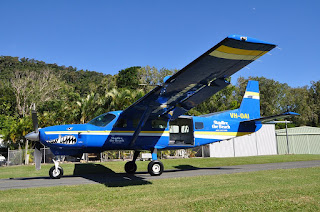 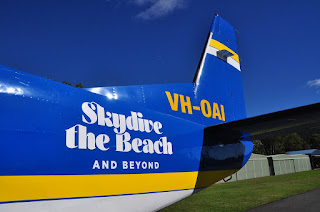 Then over this weekend just gone, on Saturday 3 December Caravan VH-DZZ was noted heading North from Emerald to Cairns.  While on Sunday 4 December, Caravan VH-ZMV was believed to have ferried South from Cairns (where it has been operating - see below) to the Whitsunday Airport at Shute Harbour.

Finally, these movements come after a similar set of  North and South movements we posted about half-way through last month where a pair of Cessna 208 Caravans of the 'Skydive the Beach Group' of Woollongong passing through Roma Airport.  On Tuesday 15 November, Cessna 208 VH-PTX arrived from Cairns and later departed to the Illawarra Regional Airport at Woollongong, while on Sunday 13 November, Cessna 208 VH-ZMV arrived at Roma Airport from Woollongong before departing to Cairns.  VH-ZMV has since commenced parachuting operations out of Cairns Airport.
Posted by Damian F at 6:19 AM