Certainly a surprise to see one of the new Royal Flying Doctor Service (RFDS) Beech B300C Super King Air VH-FDN "FlyDoc 427" visit some Central Queensland Airports for the first time ever over the last week.


Of interest, VH-FDN is one of four new Beech / Textron Aviation B300C Super King Air turboprops that the RFDS has acquired - along with VH-FDC, VH-FDD and VH-FDF.  VH-FDN was delivered to the RFDS Base in Cairns in March 2015 (as shown above).  It appears that VH-FDN has spent considerable time operating out of Cairns and Townsville - it was on display at the RAAF T150 Defence Force Air Display and Open Day in Townsville in mid-October.  It recently flew to Brisbane where it seems to be operating from. 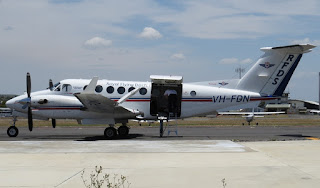 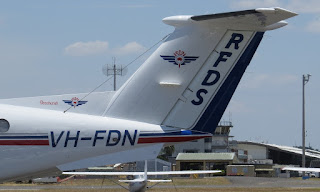 VH-FDN is believed to have made its first visit to CQ on Tuesday 6 December calling into both Longreach and Bundaberg Airport from Brisbane. It then visited Rockhampton Airport on Thursday 8 December and returned to both Bundy and Rocky (as shown below), as well as visiting Gladstone Airport, on Friday 9 December.