Over the last month or so I've noticed that four helicopters have flown into Mackay Airport and are now operating out of there on flights to positions out to sea off Mackay.  The four helicopters are operated by Jayrow Helicopters and reports suggest that Jayrow has recently been awarded a contract to operate marine pilot transfer flights from Mackay Airport to the Blossom Banks and White Tip Reef Base.

The first chopper to arrive was former Melbourne (Essendon) based Agusta A109E VH-XUM.  It was then joined by fellow A109E VH-RUA. 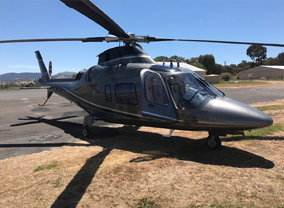 Over the last couple of weeks, a pair of Bell 206s have arrived into Mackay Airport with VH-DPS followed by VH-NEW both arriving from Emerald.

It has been interesting to note that VH-XUM, VH-RUA and VH-DPS are being used on flights out to sea from Mackay Airport with VH-NEW soon to follow.

Jayrow was the first off-shore operator, the first heli-firefighter, the first to support the mining industry, the first helicopter operator on the Antarctic, the first heli-ambulance, the list goes on.  In fact, Jayrow Helicopters is no stranger to Central Queensland having operated Sikorsky S-76A VH-JRD for the Rockhampton-based Capricorn Helicopter Rescue Service (CHRS) during recent times.


Check out the Jayrow Helicopters website:  http://www.jayrow.com.au/Default.php
Posted by Damian F at 10:58 AM