On Monday 31 May, Bowenville (near Toowoomba) based Cessna 525 CitationJet CJ1+ bizjet VH-JSZ was yet again back in the region, noted visiting some Central Queensland Airports during a busy day of flying. 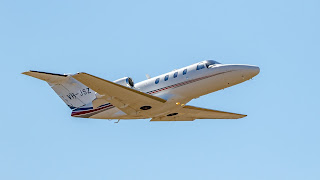 Finally, also on Monday 31 May, Ipswich-based Airborne P/L (Palm Lake Works) Pilatus PC-12/47E VH-PLE made yet another visit to Bundaberg Airport.  It looked to arrive from and depart back to the Gold Coast.
While Link Airways / Vee H Aviation Cessna 441 VH-VEJ looked to call into a position near the Newlands Coal Mine, flying up from and back to Brisbane.
Photo taken by Steve Vit  ©
Posted by Damian F at 9:27 PM