On Tuesday 4 May, Queensland Government (QGAir) Rescue (State of Queensland) Agusta AW139 helicopter VH-ESZ was spotted arriving into Rockhampton Airport as it was ferrying South from Townsville to Archerfield. 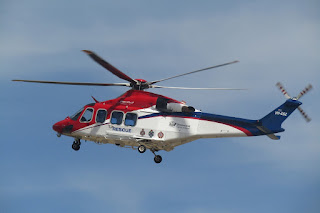 VH-ESZ has recently been operating out of Townsville Airport as "Rescue 521" and so is presumed that it has ferried to Archerfield for planned maintenance.

We shall wait and see if one of the other QGAir Rescue AW139 helicopters ferries North via CQ to replace VH-ESZ.

Meanwhile, also on Tuesday 4 May, Handel Aviation Cessna 210 VH- ZIK and Cessna 310 VH-NXS both continued their journeys from Gladstone Airport.  VH-ZIK flew down to Bundaberg Airport via some survey work before then flying up to Mackay Airport.  While VH-NXS flew up to Cairns.
They had both arrived yesterday.
Finally, also on Tuesday 4 May, Royal Australian Air Force (RAAF) Dassault Falcon 7X bizjet, A56-002 as "Envoy 03" flew up from Canberra to Emerald Airport where it completed some airwork including at least one missed approach.  It then flew across overhead Bundaberg before completing more airwork and another missed approach at Maryborough Airport.
A56-002 then returned to Canberra.
Photo taken by Trevor Hardsman  ©
Posted by Damian F at 10:23 PM