Over the course of this week, Sharp Airlines Metro III turboprop VH-OZV was noted operating their new (and former Toll Freight) cargo flights between Brisbane, Rockhampton and Mackay Airports. 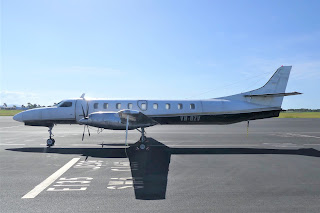 On Wednesday 5 May, it was spotted above parked at Mackay Airport for the day, after it had earlier arrived from Brisbane via Rockhampton Airport Gladstone Airport (due to a diversion from Rocky caused by fog) as 'SH162' / "Sharp 162".
VH-OZV eventually returned to Brisbane but as 'SH161' / "Sharp 161".
This is the first time we've seen a Sharp Airlines registered aircraft operating these week-daily freight flights with two that fly into CQ via Rockhampton and Mackay Airports still being operated by former Toll Freight aircraft.
As reported below, at the start of February, the Victoria-based Sharp Airlines (Sharp Aviation) acquired all Toll Metro flight services/contracts, crews and aircraft.
Photo taken by 'JM'  ©
Posted by Damian F at 10:08 PM