On Thursday 20 May, my local Clermont Aerodrome played host to a couple of nice and familiar visitors.
Mackellar Mining Equipment / Flight Options (Australia) Cessna 560 Citation Ultra bizjet VH-MMC landed at Clermont Aerodrome from the Sunshine Coast.  At the time of writing, it appeared to be staying for at least the night. 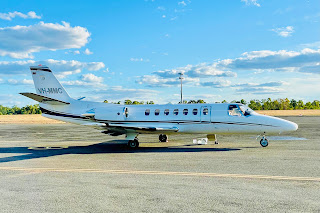 UPDATE!  On Friday 21 May, VH-MMC departed Clermont Aerodrome and returned to the Sunshine Coast.
Hinterland Aviation Cessna 208 VH-NDC was noted also visiting Clermont Aerodrome.  It arrived from Rockhampton Airport and then later flew up to the Labona Station Airstrip within Adani Australia's (Bravus Mining & Resources) Carmichael Coal Mine site, both as HND310.  VH-NDC then returned to Rockhampton Airport as HND311.
Of interest, VH-NDC then departed Rockhampton for Cairns as HND615.
While a little earlier, fellow Hinterland Aviation Cessna 208 Caravan VH-LZK arrived into Rockhampton Airport from Cairns also as HND615.  VH-LZK then departed Rocky to Labona and back as HND370/1.
Meanwhile, also on Thursday 20 May, Seair Pacific / Istlecote Cessna 208 Caravan VH-LYT looked to fly from Hervey Bay (Fraser Coast) Airport to Middlemount Aerodrome before later returning to and Maryborough and Hervey Bay Airports.
Sabstall Beech B200 King Air VH-NME flew up from Toowoomba to Samuel Hill Aerodrome within the Shoalwater Bay Training Area (SWBTA) and then down to Archerfield.  It then returned to Toowoomba.

Gold Coast-based Hawker Beechcraft B300 Super King Air VH-OXF looked to visit the Lotus Creek area, arriving from and later departing back to the South.
Raytheon A36 Bonanza VH-YGM arrived from its Orange base in New South Wales for second time this week - although it flew via Bankstown on this occasion.
UPDATE!  On Saturday 22 May, VH-YGM returned direct to Bankstown.
And Brescon (Toowoomba) Beech B200 King Air VH-WXB flew up directly to the Labona Station Airstrip from Toowoomba-Wellcamp Airport.
UPDATE!  On Friday 21 May, VH-WXB departed Labona and returned to Wellcamp.
Finally, it's worth noting that during this week, Aero Logistics Cessna 441 VH-YFD has continued to complete almost-daily aerial survey flights out of and back to Rockhampton Airport. 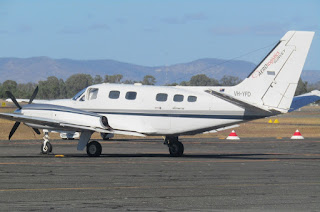 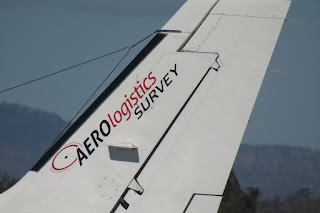 It was spotted resting on the Rockhampton Airport General Aviation (GA) Apron on Wednesday 19 May.
Photos taken by Trevor Hardsman  ©️
Posted by Damian F at 11:18 PM