Certainly a great sight and sound at Rockhampton Airport on Thursday 27 May, with all four Royal Australian Air Force (RAAF) Pilatus PC-21 Forward Air Control Aircraft from No. 4 Squadron calling while returning home to RAAF Base Williamtown following a deployment to the Northern Territory where they participated in the RAAF' Exercise Black Dagger 21-1. 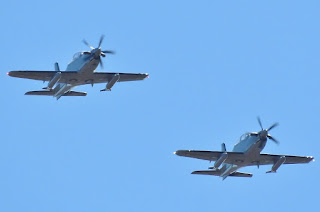 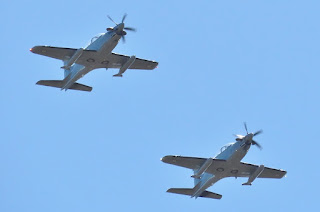 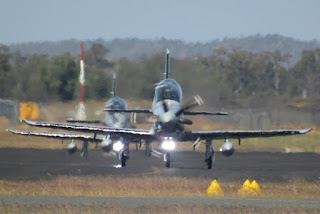 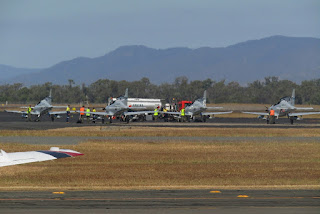 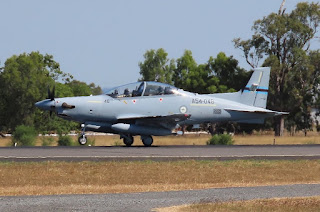 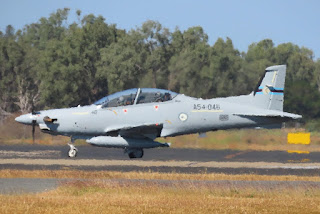 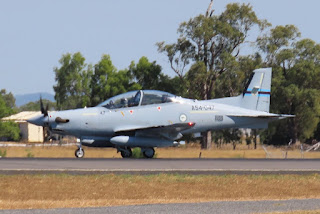 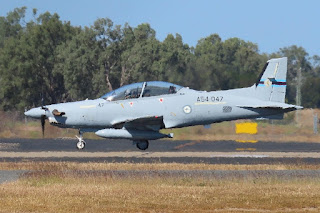 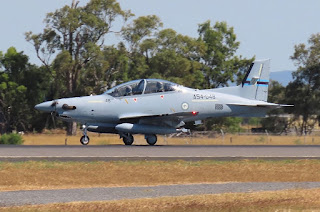 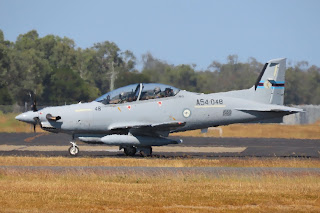 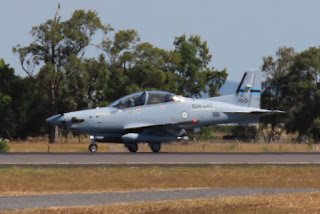 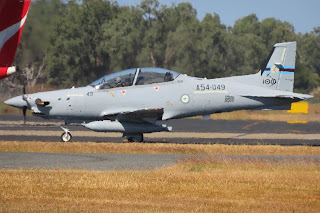 All four aircraft taxied in and were refuelled.  They later departed to Williamtown, again flying in their pairs.
This is the first time that any of the RAAF's PC-21 turboprop aircraft has called into Rockhampton Airport.  The RAAF acquired 49 new Pilatus PC-21 aircraft and 7 flight simulators as part of the AIR 5428 Pilot Training System project, with the PC-21 aircraft replacing the RAAF's current Pilatus PC-9/A aircraft.  They are mostly based at RAAF Base East Sale in Victoria and RAAF Base Pearce in Western Australia.
Meanwhile, Exercise Black Dagger 21-1 is a field training Exercise lead by Number 4 Squadron, held at the Delamere Air Weapons Range in the Northern Territory and based out of RAAF Base Tindal over the early part of May 2021.
The Exercise is the final component of the No. 67 Joint Terminal Attack Controller (JTAC) course.  The course is a crucial activity in preparing graduates to execute the planning, briefing, controlling and reporting required to conduct close air support on the battlefield.
Supporting the Exercise are F/A-18A/B Hornet aircraft from the RAAF's No.75 Squadron, PC-21 Forward Air Control aircraft from the RAAF's No.4 Squadron, Tiger ARH from the Australian Army's 1st Aviation Regiment and 81mm Mortars from the Australian Army's 5th Battalion Royal Australian Regiment.
Finally, it's worth noting that also in the Northern Territory, the RAAF has deployed approximately 50 aircraft and more than 500 personnel to the 'Top End' for Exercise Arnhem Thunder 21.
It is one of the RAAF’s largest domestic training exercises for 2021 and provides important force generation training, focusing on high-end collective training and involving multiple Force Element Groups (FEGs).
Arnhem Thunder 21 will be conducted from RAAF Bases Darwin and Tindal during May and June 2021 and will use the Mount Bundey Training Area and Delamere Air Weapons Range.
Aircraft deployed to the exercise include the F-35A Lightning II, F/A-18F Super Hornet, EA-18G Growler, F/A-18A/B Hornet, Hawk 127, C-130J Hercules, C-17A Globemaster, C-27J Spartan, KC-30A Multi-Role Tanker Transport, and E-7A Wedgetail.
Arnhem Thunder 21 sees the F-35A Lightning II operate out of RAAF Base Darwin for the very first time as shown above.
Sincere thanks to local plane spotters Trevor H and Kayanne H for taking the time to capture and send through these great photos!
Photos taken by Trevor Hardsman and Kayanne Hardsman  ©
Posted by Damian F at 7:46 PM