On Friday 28 May, Royal Australian Air Force (RAAF) Alenia C-27J Spartan transport aircraft A34-004 was spotted as it completed a touch-and-go approach at Rockhampton Airport.  The Spartan had flown down from Cairns. 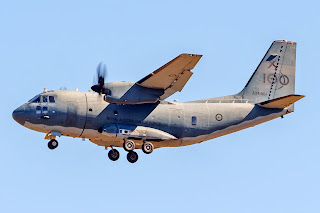 After the touch-and-go at Rockhampton Airport, A34-004 departed to RAAF Base Amberley.
Of interest, A34-004 was flying as "Kaos 70" and appeared to complete airwork at Proserpine (Whitsunday Coast) Airport while on a flight out of and back to Cairns late on Thursday 27 May.
It also appears that A34-004 also as "Kaos 70" flew into Charleville Airport from Amberley late on Tuesday 25 May where it then spent the night.
As shown, A34-004 still wears additional decals to commemorate the RAAF's 100th anniversary.