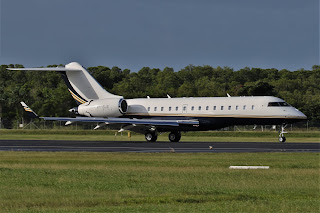 It looked fly up from Sydney and Brisbane to Hamilton Island Airport before then heading down to Mackay Airport.  VH-SJE then flew up to Townsville and Cairns (pictured) before it then flew back down to Brisbane.
VH-SJE was only re-registered from VH-SGA late last week.  The marking VH-SGA has now been taken up by a Gulfstream G-VI (G650ER) registered and operated by to the same organisations.

UPDATE! On Saturday 29 May, VH-CDG departed Hamilton Island Airport and returned to the Gold Coast.
While Homada Pty Ltd Cessna 560XL Citation XLS bizjet VH-XCU departed Hamilton Island Airport and flew to Melbourne (Essendon) before continuing to Melbourne (Moorabbin).  It had flown into Hamo from there last Friday 21 May and completed a return flight to Gove (Northern Territory) and back on Saturday 22 May.
Meanwhile, also on Monday 24 May, Machjet (Machjet International) Cessna 525A Citation CJ2 bizjet VH-ZIY arrived into Proserpine (Whitsunday Coast) Airport from the South before then flying down to Hervey Bay (Fraser Coast) Airport.  It then flew back to the Sunshine Coast.

Avcair (Avgunn) LearJet 60 bizjet VH-ILJ landed at Hervey Bay (Fraser Coast) Airport from Brisbane.  It then departed to the North before later returning to Brisbane.

And Australian Country Choice Properties (Brisbane) Cessna 560 Citation V Encore bizjet VH-ACC departed Wellclose for Babbiloora before it then departed to Brisbane.  It appears that VH-ACC had originally departed Brisbane last Friday 21 May.

Finally, also on Monday 24 May, Seair Pacific / Istlecote Cessna 208 Caravan VH-LYT looked to fly from Hervey Bay (Fraser Coast) and Maryborough Airports to Middlemount Aerodrome before later returning to Hervey Bay Airport but via Biloela / Thangool Airport.
Finally , also on Monday 24 May, Skydive Australia Cessna 208B Grand Caravan VH-SKR departed Emerald Airport for Gunnedah, Bankstown and the Shellharbour Airport at Wollongong where it appears to be based on parachuting operations.  It had arrived into Emerald Airport in the wee small hours of Monday 24 May, flying up from Wollongong and Bankstown.
Photo taken by Jonathan Williams  ©️
Posted by Damian F at 7:56 PM