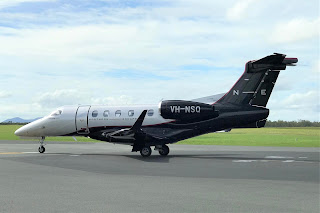 And Machjet (Machjet International) Cessna 525 Citation CJ1 bizjet VH-SIY arrived from the Sunshine Coast and Hamilton Island Airports.  It then flew down to Sydney before returning to the Sunny Coast. 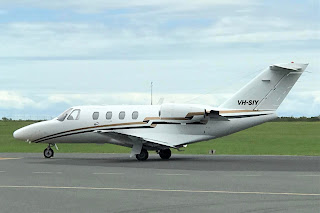 While over at the Whitsunday Coast Airport at Shute Harbour, the often visiting American-registered Eclipse EA500 bizjet N257AK was noted arriving from Archerfield.
And down at Roma Airport, Mitchell Water Cessna 525 Citation M2 bizjet VH-WMY arrived from Melbourne (Moorabbin) and Ballarat.
UPDATE!  On Thursday 27 January, VH-WMY departed Roma Airport for Ballarat, Melbourne (Essendon) and then back to Moorabbin.

While Spectrum Air Hire (of Sydney) Beech 76 Duchess VH-IPH flew across from Hamilton Island Airport to Proserpine Airport before returning to Hamo.  It seems to have arrived there from Bankstown, Warwick and Bundaberg Airports just over a week ago.

And BPW Aviation / Airspeed Aviation of Scone, New South Wales, Cessna 404 Titan VH-SKV was noted arriving into Mackay Airport from Tamworth.  It later departed for Archerfield and then back to Tamworth.

Finally, also on Wednesday 26 January, Skytrans Airlines Dash-8-100 VH-QQF departed Rockhampton Airport for Mackay Airport as SKP785 before it then completed three return flights from Mackay Airport to the Labona Station Airstrip within Adani Australia's (Bravus Mining & Resources) Carmichael Coal Mine site and back as SKP793/4/1/2/5/6.
At the time of writing, it is due fly from Mackay Airport to Brisbane as SKP786 early on Thursday 27 January.

And it appears that fellow Skytrans Dash-8-100 VH-QQC flew down from Cairns to Rockhampton Airport as SKP775 before then flying to Labona as SKP777 and then back to Cairns as SKP778.
All photos taken by 'AC'  ©
Posted by Damian F at 8:46 PM