On Saturday 29 January, the skies above Central Queensland came alive with the sound of Royal Australian Air Force (RAAF) fighter and transport jets overflying heading to Guam and the Commonwealth of Northern Mariana Islands to participate in Exercise Cope North 2022 with the United States Air Force (USAF) and the Japan Air Self-Defense Force (Koku-Jieitai) from 2 to 18 February 2022. 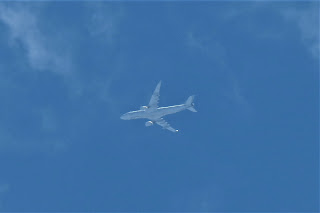 During the morning, Royal Australian Air Force (RAAF) Airbus A330-200 / KC-30A Multi Role Tanker Transport (MRTT) A39-003 "ASY408" departed RAAF Base Amberley and met up with an unknown number of RAAF Lockheed Martin F-35 Lightning II fighter aircraft as "ASY1052" which departed RAAF Base Williamtown.  While I spotted (above) KC-30A A39-001 "ASY409" also from Amberley which met up with two F-35s as "ASY1048" which were also out of Williamtown.
UPDATE!  On Sunday 30 January, KC-30A A39-001 "ASY409" returned to Amberley from Guam.
UPDATE!  On Monday 31 January, KC-30A A39-002 "ASY411" flew up from Sydney and met up with yet more F-35 fighter jets from Williamtown and all flew North towards Guam
Finally, RAAF Boeing B737-7ES / E-7A Wedgetail Airborne Early Warning & Control (AEW&C) aircraft A30-002 as "ASY252" also out of Williamtown was refueled by KC-30A A39-006 as "Dragon 45" which flew out of and back to Amberley.
Exercise Cope North 2022 aims to increase the interoperability of the RAAF, USAF and the Koku-Jieitai by sharing tactics, techniques and procedures for humanitarian assistance and disaster relief (HADR) missions.
During the exercise, the RAAF will deploy its E-7A Wedgetail, C-27J Spartan, KC-30A multi-role tanker transport and F-35A Lightning II fighters.
Posted by Damian F at 8:43 PM