On Monday 3 January, Virgin Australia Boeing B737-800 VH-IWX was photographed and noted making its first visit into a couple of Central Queensland Airports after it was acquired by the airline from Singapore Airlines (SilkAir). 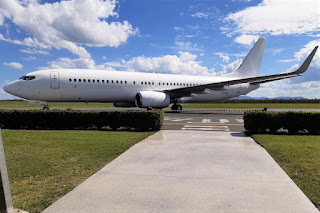 As mentioned below, B737-800 was previously operated by SilkAir (now merged with Singapore Airlines) as 9M-MGP and was delivered to Virgin Australia in Brisbane in late November.  After being promptly placed on the Australian Aircraft Register and VH-IWX, it spent a week at Townsville in early December where it was re-painted in to a simple plain white livery.
A week later, VH-IWX entered service with Virgin Australia on Saturday 18 December.  It becomes the fourth former SilkAir B737-800 to enter service with the airline.
As mentioned below, Virgin Australia will take delivery of seven former SilkAir B737-800 aircraft. With SilkAir now merged with parent airline, Singapore Airlines, these aircraft were deemed surplus to requirements. SilkAir moved to dispose of the planes earlier this year. It is reported these aircraft are 9V-MGF, 9V-MGG, 9V-MGH, 9V-MGI, 9V-MGJ, 9V-MGP, and 9V-MGQ.
9V-MGH was delivered to Virgin Australia in Brisbane on Thursday 9 December with it promptly placed on the Australian Aircraft Register as VH-IJW.  It is pictured below returning to Brisbane from Townsville on Tuesday 21 December after being re-painted. 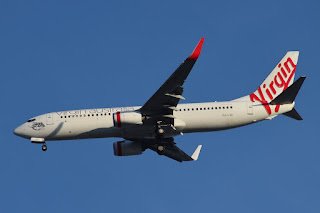 VH-IJW is yet to enter service.
And 9V-MGQ was delivered to Virgin Australia at Brisbane on Thursday 30 December. 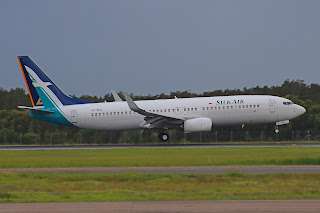 It looks to have been re-registered as VH-IWY but is currently still in Brisbane.
Photos taken by 'AC' and Lloyd Fox  ©
Posted by Damian F at 9:08 PM