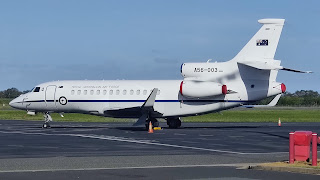 The Falcon 7X bizjet, which is flown by the RAAF's VIP 34 Squadron, looked to arrive from Canberra via Warwick Airport as "Envoy 82".

At the time of writing, it appears that A56-003 is staying for the night at Mackay Airport.
UPDATE!  During the afternoon on Monday 24 January. A56-003 "Envoy 82" departed Mackay Airport for Darwin.