On Monday 10 January, Jetstar Airways Airbus A320-232(WL) VH-YXS was spotted and noted making its first visit to Central Queensland at both Mackay and then Proserpine (Whitsunday Coast) Airports. It was spotted below at Mackay Airport as it completed the JST886/887 service from and back to Brisbane. 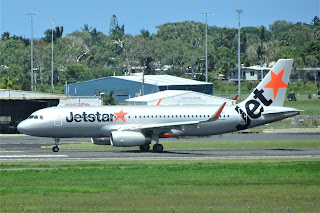 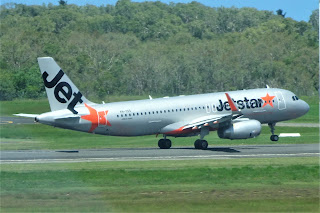 VH-YXS was then later note operating the JST836/835 service into Proserpine (Whitsunday Coast) Airport from and back to Brisbane.
Of interest, VH-YXS is one of four recently delivered Airbus A320 aircraft that have entered service with Jetstar Airways that all previously operated with Jetstar Japan.  The A320 was previously operated by Jetstar Japan as JA17JJ and was delivered from Japan to Australia via Brisbane with its Japanese registration marking in late July - as shown below.
It was then placed on the Australian Aircraft Register as VH-YXS.
Its first flight appears to be on Tuesday 12 October with it formally entering service out of the Gold Coast on Tuesday 14 December.
Of interest, also recently entering service were fellow former Jetstar Japan A320s VH-YXT (ex JA23JJ / EC-LZF) and VH-YXV (ex JA11JJ) which were both were delivered direct to Brisbane from Japan.  While VH-YXW (ex JA18JJ) was stored at Alice Springs for some time before heading to Brisbane.
Also on Monday 10 January, VH-YXT was also spotted also visiting Mackay Airport.  It arrived from Brisbane late on Sunday 9 January as JST882 but looked to sustain a technical problem with it spotted departing back to Brisbane empty as JST7989. 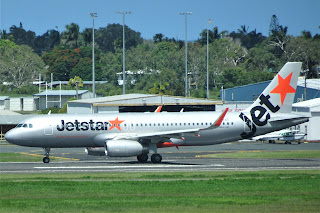 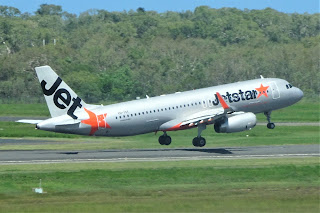