On Wednesday 26 January, VH-YXS (ex JA17JJ) was photographed as it operated the JST840/1 service from and back to Sydney. 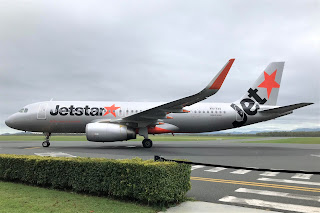 And on Tuesday 25 January, VH-YXW (ex JA18JJ) was photographed as it also operated the JST840/1 service from and back to Sydney.  This is our first photo of this airframe in Central Queensland! 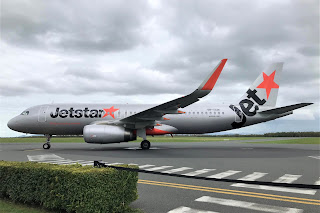 As mentioned previously, the A320s are part of a group of four recently delivered Airbus A320 aircraft that have entered service with Jetstar Airways that all previously operated with Jetstar Japan.  VH-YXT (ex JA23JJ / EC-LZF) and VH-YXV (ex JA11JJ) are the others and visit Proserpine, Hamilton Island and Mackay Airports quite often.
Meanwhile, another two airframes - VH-YXU (ex JA06JJ) and VH-YXQ (ex JA12JJ) - were up until recently stored at Alice Springs but have flown to Darwin and Singapore (Seletar) in recent days with speculation that they have gone there to be prepared to enter service in Australia.
Finally, late on Saturday 22 January, Jetstar Asia Airways (Singapore) Airbus A320-232 9V-JSN flew into Melbourne (Tullamarine) from Singapore (Changi) as JSA903.  It is believed that it too is being prepared to be placed on the Australian Aircraft register and enter service with Jetstar in Australia.
All photos taken by 'AC'  ©
Posted by Damian F at 9:56 PM