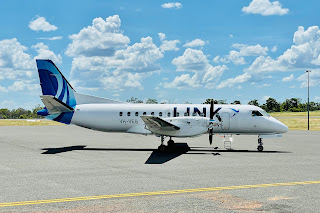 It looked to arrive direct from Brisbane and later departed to Emerald Airport and then back to Brisbane.
I was told that this is a new Flu-in Fly-out (FIFO) charter run which will call into Clermont Aerodrome each Monday and Friday.
And about the same time, fellow Link Airways SAAB 340B VH-VEF called into Mackay Airport, arriving from and later departing back to Brisbane.
Meanwhile, also on Friday 7 January, Machjet (Machjet International) Cessna 525A Citation CJ2 bizjet VH-ZIY flew down from Hamilton Island Airport to the Sunshine Coast.  It had arrived from there on Thursday 6 January.
Also departing Hamilton Island Airport was Corporate Aviation Bell 429 Global Ranger helicopter VH-EQP which returned to its Southport base via Gladstone Airport.  It had arrived into Hamo from these places back on Monday 27 December.
Torrens Creek (Hughenden) based SOCATA TBM700 VH-CEA called into Rockhampton Airport from the Gold Coast.
UPDATE!  On Saturday 8 January, VH-CEA departed Rockhampton Airport for Aberfloyle.
While Aircair Aviation (Aircair Helicopters) Cessna 340A VH-MPQ called into Longreach Airport from Moree (Beela) before it then departed to Richmond.
And the Queensland Police Service (Airwing) (State of Queensland) Raytheon B1900D VH-PSK made its first visit to the region for the year, arriving into Rockhampton Airport from Cairns and Townsville before it then departed to Brisbane.  It then returned to Rockhampton Airport from Brisbane before departing directly back to Cairns.
Finally, on Thursday 6 January, the Queensland Government Airwing (State of Queensland) Raytheon B300 Super King Air VH-SGQ was noted visiting Bowen Airport from Brisbane.
And recently re-registered Sydney-based Next Aviation Beech 58 Baron VH-DMN called into Emerald Airport from Mareeba before it later departed to Dubbo and Bathurst.
Posted by Damian F at 9:12 PM