On Friday 28 January, Regional Express (REX) SAAB 340B VH-ZLH was spotted at Emerald Airport after earlier arriving from Brisbane as RXA9564 on what seemed to be a closed charter flight. 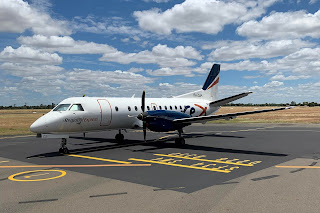 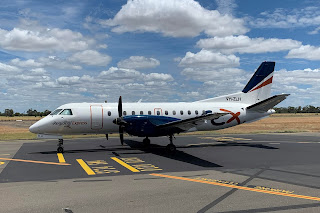 After some time on the ground, it then departed Emerald Airport and returned to Brisbane but as RXA9565.

Meanwhile, also on Friday 28 January, Link Airways (Corporate Air / Vee H Aviation) SAAB 340B turboprop VH-VEO visited Mackay Airport from Brisbane.  While fellow SAAB 340B VH-VEB flew up from Brisbane to my local Clermont Aerodrome and then Emerald Airport then back to Brisbane.
And Link Airways (Corporate Air / Vee H Aviation) Metro 23 VH-VEU operated the airline's Regular Passenger Transport (RPT) service into Biloela / Thangool Airport from and back to Brisbane.
Finally, a couple of other movements into the region, also on Friday 28 January, included the often visiting American-registered Eclipse EA500 bizjet N257AK which departed the Whitsunday Airport at Shute Harbour for Archerfield.
Kibble (Aeronautics and Technology Holdings) Pilatus PC-12/45 VH-PID departed Rockhampton Airport for Toowoomba.  It had arrived from its Toowoomba base into Rocky the previous day.
All photos taken by 'AC'  ©
Posted by Damian F at 9:28 PM