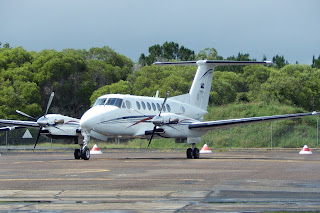 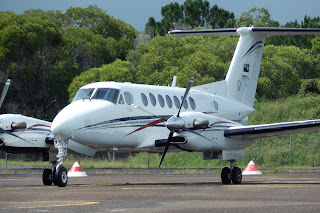 It looked to arrive from and then later depart back to Brisbane.
Another King Air in the form of Machjet (Machjet International) Hawker Beechcraft B200 King Air VH-ZSY was noted in some parts of the region.  The bright yellow King Air looked to call into Theodore Aerodrome from the Sunshine Coast before it then popped up into Rockhampton Airport.
It appears that VH-ZSY then flew out to the Labona Station Airstrip within Adani Australia's (Bravus Mining & Resources) Carmichael Coal Mine site before returning to Theodore Aerodrome and the Sunshine Coast.
Meanwhile, also on Tuesday 11 January, DeGunst Transport P/L Textron (Cessna) 208 Caravan VH-NPZ departed its Bundaberg Airport base for Mackay, Nebo and Rockhampton Airports before then returning to Bundy.
Another Cessna 208 Caravan in the form of VH-DZZ operated by the Skydive the Beach Group, flew into the Whitsunday Airport at Shute Harbour from Tully after some time away.  Cessna 208 Caravan skydiving aircraft VH-OAI remains at the Whitsunday Airport after filling-in for VH-DZZ over the last few weeks.
Also at the Whitsunday Airport at Shute Harbour, the often visiting American-registered Eclipse EA500 bizjet N257AK was noted departing for Archerfield.  It appears to have arrived from there way back on Monday 29 November.
While Aircair Aviation (Aircair Helicopters) Cessna 340A VH-MPQ flew up from Moree (Beela) to Emerald Airport before continuing to Pinnarendi and Cairns.
Brisbane-based Australian Agricultural Company Pilatus PC-12/47E VH-AAC departed Archerfield and looked to call into the Goonoo Feedlot (near Emerald) before then departing to the North-West - possibly to Mount Isa.
UPDATE!  On Wednesday 12 January, VH-AAC continued from Mount Isa to Tennant Creek in the Northern Territory.
And Hinterland Aviation Cessna 310R VH-TFY as 'HND730' looked to call into Rockhampton Airport from Cairns before then returning there via Townsville.
Finally, also on Tuesday 11 January, Skytrans Airlines Dash-8-100 VH-QQC departed Rockhampton Airport and flew to Labona and back as SKP774/5.  It had arrived the previous day from Brisbane and completed a run to Labona and back to Rocky - as has been happening over the last few weeks,
But then later in the day, VH-QQC departed Rockhampton Airport for Proserpine (Whitsunday Coast) and Cairns Airport as SKP86 - the 'usual' but delayed scheduled service.
Fellow Skytrans Dash-8-100 VH-QQF then arrived into Rockhampton Airport from Cairns and Proserpine Airports as SKP85 before it then completed a flight to Labona and back to Rockhampton Airport as SKP771.
UPDATE!  On Wednesday 12 January, Skytrans Dash-8-100 VH-QQF departed Rockhampton Airport for Mackay Airport as SKP785 before then flying to Labona and back to Mackay Airport as SKP793/4.  It then flew to Brisbane as SKP786.
All photos taken by David Geck  ©️
Posted by Damian F at 9:31 PM