A nice surprise for Central Queensland Plane Spotters over the weekend with a nice pair of recently repainted Virgin Australia Boeing B737 aircraft popping into Mackay and Rockhampton Airports over the weekend.

The first surprise arrival was on Saturday 28 January when Virgin's Boeing B737-800 VH-VOK, which now wears the new Virgin Australia livery, touched down at Mackay Airport. It is shown departing for Sydney as DJ1474. 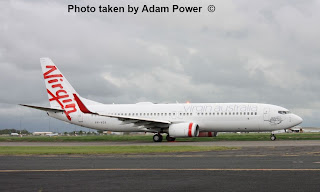 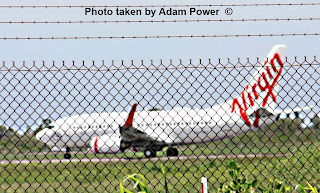 VH-VBY was also noted operating to Rockhampton Airport again on Monday 30 January.
Posted by Damian F at 6:45 AM