Other Notable Movements into Central Queensland Airports over the Last Week

Using various online facilties - including PlaneFinder! - here are some notable movements that have appeared at various central Queensland airports over the last week. Funnily enough, even though I have been away in Melbourne and Sydney, I've been able still photograph most of these aircraft!

On Thursday 5 January 'Airline of Virgin Blue' coloured B737-800 VH-VUN was noted at Mackay Airport.

Also on Thursday 5 January, recently repainted Virgin Australia B737-800 VH-VUF (pictured below in Melbourne) was noted at Proserpine / Whitsunday Coast Airport, while on Friday 6 January VH-VUF popped into Rockhampton Airport. 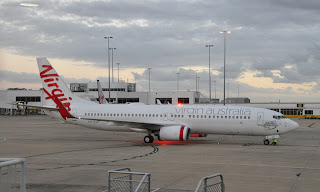 Some newer Virgin Australia B737-800s have been noted at Hamilton Island Airport, with VH-YVA and VH-YFF noted on Sunday 8 January, while VH-YVC and VH-YFH were noted on Monday 9 January.

One other notable movement into Mackay Airport - on Saturday 7 January - was Virgin Australia B737-700 VH-VBY. 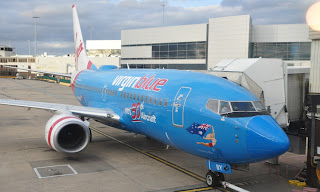 Its arrival is notable as this aircraft has now entered the hangar in Townsville to be repainted from its striking blue livery (as shown above) to the standard Virgin Australia livery.

One last new aircraft noted in Central Queensland was Jetstar Airways Airbus A320 VH-VGA, which was noted at Hamilton Island Airport on Saturday 7 January. 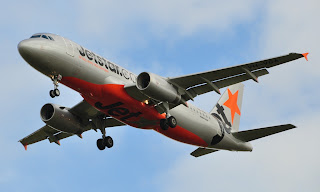 As shown in the photo above from Melbourne, VH-VGA has revised Jetstar titles on the forward section of the fuselage.
Posted by Damian F at 11:44 PM