It's possible that as many as nine Skytrans Airlines operated fly-in fly-out (FIFO) charters departed Clermont Aerodrome on Tuesday 3 January. 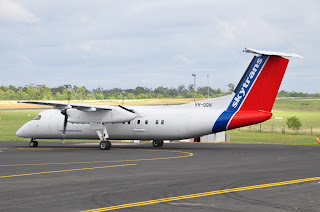 There were the three 'usual' morning departures with Dash-8's VH-QQH, VH-QQJ, and VH-QQN noted arriving into Brisbane. However later in the day, there were as many as six more Brisbane to Clermont flights, with return flights to Brisbane operating via Birdsville and Windorah.

According to Lloyd F in Brisbane, there were a total of 20 Skytrans Airlines flights out of Brisbane on Tuesday - to Clermont, Middlemount, and the scheduled flight through South-Western Queensland.

There were also several Brindabella Airlines Metro, and Aergo / Regional Express (REX) SAAB 340 FIFO charters, that flew from Brisbane to Emerald and to Middlemount, as well as an Alliance Airlines FIFO charter to Emerald operated by Fokker F-100 VH-XWR. 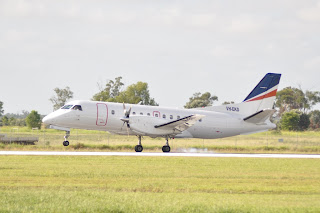 There were a total of 58 FIFO flights, with numerous other flights operated by Beech B200 King Airs and Piper PA-31 Navajos to Central Queensland airports.
Posted by Damian F at 9:23 PM