Passengers have been left stranded at Mackay Airport this week as wet weather has affected both inbound and outbound flights. 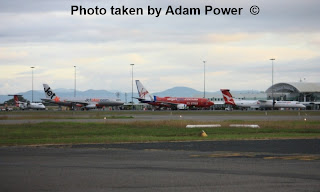 Most disruptions occurred as the wet weather set in during the afternoon of Thursday 12 July.  Two Virgin Australia flights - one from Sydney and one from Brisbane - as well as a Jetstar flight from Brisbane were unable to land, and all diverted to Brisbane.

There were also disruptions this week at Proserpine / Whitsunday Coast Airport and Hamilton Island Airport, with a number scheduled flights to Hamilton Island diverting due to the wet weather.


Finally, on Saturday 14 July, a very foggy start to the day saw disruptions at Emerald Airport, with two early morning QantasLink services returning to Brisbane.  I believe the first commercial aircraft to successfully land at Emerald on Saturday touched down around lunchtime - it was QantasLink (Alliance Airlines-operated) F-100 VH-FKK (file photo below). 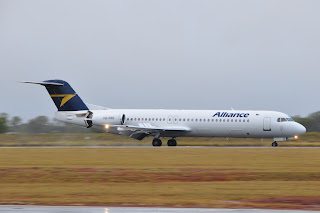