A Few From Rockhampton Airport - Including an American Beech Bonanza

Overall, it was a pretty quiet weekend at Rockhampton Airport, with very few, if any, 'out-of -the-ordinary' movements.  One of the more interesting visitors was this Hawker Beechcraft G36 Bonanza, wearing the American registration mark of N8074N. 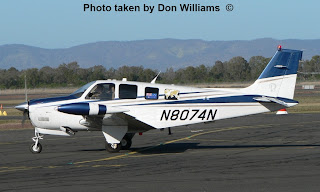 It is pictured arriving at Rockhampton Airport from Mount Isa and Darwin late on Saturday 7 July.  On Sunday 8 July, N8074N was noted departing to Bankstown Airport.

There were also a couple of Skytrans Airlines charters to not only Rockhampton Airport, but also Gladstone Airport over the weekend.  I suspect that these were associated with statewide sporting events, with Skytrans being previously noted carrying Rugby League and Basketball teams up and down the Queensland coast to participate.  Skytrans Dash-8-300 VH-QQP was noted at Rockhampton Airport on Saturday 7 July, arriving from Cairns and departing to Brisbane. 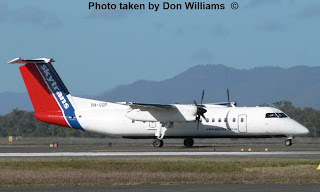 Rockhampton spotters noted little action at the Airport during the weekend in association with the Australian Defence Forces (ADF) military exercises currently underway in the Shoalwater Bay Training Area (SWBTA).  However, Don W sent through a couple of photos he took from last week, featuring the Royal Australian Air Force (RAAF) Brittish Aerospace (BAe) Hawk 127 jets - A27-14 and A27-28. 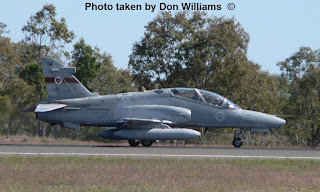 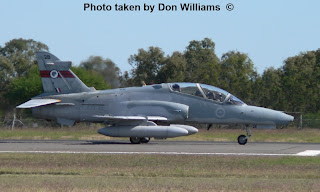 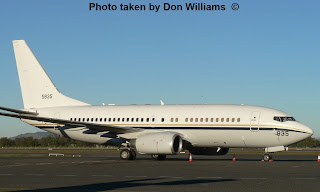 Lovely photos - thanks Don!
Posted by Damian F at 8:08 AM