Well the rain was clearing, so we popped out to Gladstone Airport on Saturday 14 July to watch some of the morning's goings-on.

Commercial movements observed were exclusively from QantasLink, including Dash-8-Q400 VH-QOF departing to Brisbane as QLK2301. This plane was running some 3 hours late due to the poor weather moving through the coast. 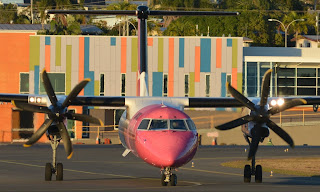 One final arrival into Gladstone that was worth noting was Dash-8-Q400 Next Gen VH-LQB. This is one of the newer Dash-8-Q400s that are operated by Qantaslink.

VH-LQB arrived from Hervey Bay after persumably diverting there while enroute to Gladstone from Brisbane due to weather. Indeed VH-LQB was noted to be operating the QLK2332 flight, and interestingly, it was noted that only 2 passengers disembarked at Gladstone. VH-LQB later returned to Brisbane as QF2335.

One final Cessna 210 noted was VH-EFP which is owned by Aerotor, and is shown parked outside their hangar at Gladstone Airport.

Of the helicopters that were noted, Australian Helicopters Aerospatiale AS.350BA Squirrel VH-HQO is a familiar sight at Gladstone Airport, and was preparing to depart.

While another Squirrel helicopter in the form of Aerospatiale AS.355F1 VH-ZWB was noted.  VH-ZWB seems to be operating Island transfers for Heli-Reef.

Lastly, seemingly a visiting helicopter to Gladstone was Bell 206 VH-JAQ of Stirling Consolidated at Theodore.
Posted by Damian F at 1:01 PM