A Few of the RPT Commercials at Rockhampton Airport This Week

As well as the fantastic Royal Australian Air Force (RAAF) and Australian Army action that we've highlighted in the Blog posts below, I thought that we should also highlight some of the Regular Passenger Transport (RPT) commercial traffic that has graced Rockhampton Airport this week.

Photographed departing early on Tuesday 3 July was Alliance Airlines Fokker F-100 VH-XWM which continues to operate for Virgin Australia.VH-XWM is pictured departing to Brisbane as DJ1232. 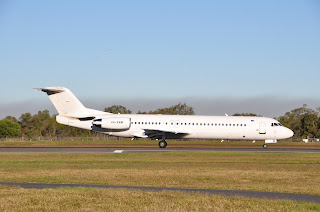 Along with sistership VH-XWN, these two Alliance Airlines Fokkers continue to operate for Virgin Australia on sectors out of Brisbane to Rockhampton, Cairns, and Newcastle (Williamtown).

Alliance Airlines Fokker F-100s also continue to fly into Rockhampton Airport operating on behalf of QantasLink.  Pictured below is F-100 VH-FWH departing back to Brisbane on Wednesday 4 July. 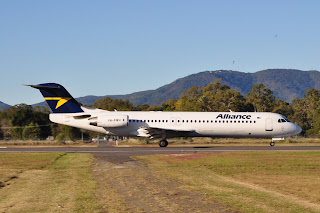 QantasLink (Sunstate Airlines) does continue to fly into Rockhampton with their Dash-8 aircraft.  Pictured below are Dash-8-Q400s VH-QOH (which is still looking resplendent in its Breast Cancer Awareness colour scheme) and VH-QOD (caught at the moment of touch down on Rockhampton's Runway 15). 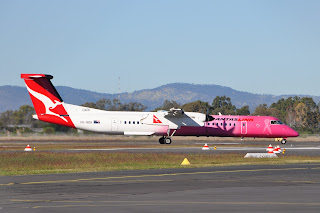 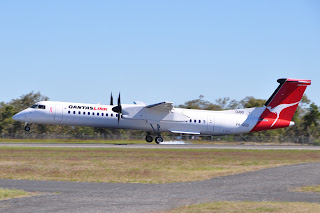 QantasLink also utilises Cobham Aviation-operated Boeing B717-200 aircraft on some services between Brisbane and Rockhampton.  There are currently two B717-200s - VH-NXN and VH-NXO - based at Brisbane that operate 2-3 daily services to Mackay and Gladstone, as well as Rockhampton.  I managed to catch both at Rockhampton over the last couple of days. 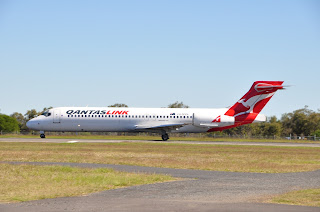 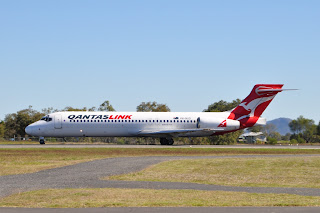 As announced in a Blog Post below, Virgin Australia are increasing the number of flights it operates into Rockhampton.  Some of these increases are on the Rockhampton to Townsville route, which will soon be flown almost daily by Skywest Airlines-operated ATR 72-500s.

On Wednesday 4 July I photographed VH-FVM departing to Townville as DJ1901 ("Virgin 901 Alpha"), having previously arrived from Brisbane as DJ1239 ("Virgin 239 Alpha"). 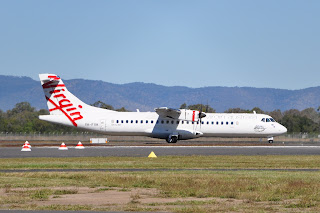 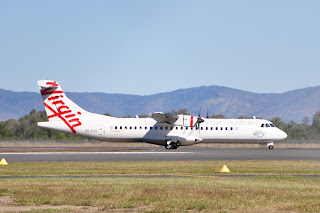 What a great variety of airlines we see in Central Queensland!
Posted by Damian F at 3:38 PM