Emerald-based Advance Aviation is spruiking the capabilities of its recently acquired Beech B200 King Air aircraft - VH-WJK - that has recently joined their growing charter fleet at Emerald Airport.

The Pratt and Whitney-powered, twin-turbine aircraft, is the first of its kind to be based in Emerald, and has recently joined the Advance Aviation fleet, and has been noted operating both fly-in fly-out (FIFO) and other general charter flights out of Emerald to other ports in Central Queensland and even beyond to Adelaide. 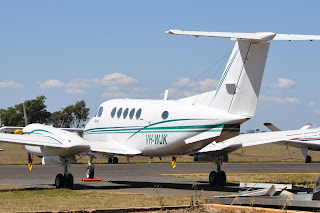 According to the local paper - the CQ News - Advance Aviation are quite "excited to offer (the) aircraft to the Central Highlands".  "This is the first turbine-pressurised aircraft based (in Emerald) and it takes us up to a whole new level in service and capability."

By all accounts, the aircraft's interior is nothing short of spectacular, and one might be forgiven for feeling as though they are in an expensive music video, rather than in country Queensland!
Posted by Damian F at 8:39 AM