As we posted last week, QantasLink will begin operating services from Sydney to Gladstone from Monday 4 March 2013. 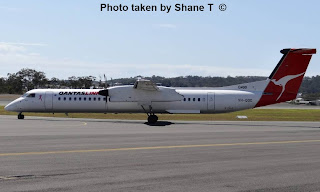 I have found the following flight number information and flight times on a couple of other aviation forums, so thought I'd share them on the Blog as well!

Immediate feedback from some members of one particular aviation forums suggested that 2 hours and 25 minutes in a Dash-8-Q400 is a bit much. Readers should perhaps be reminded that some QantasLink Dash-8-Q400 flights between Brisbane and Longreach can take about 2 hours themselves!!
Posted by Damian F at 8:01 PM