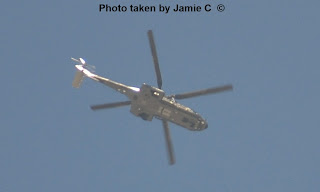 Meanwhile on Sunday 23 September, several light General Aviation (GA) aircraft were noted visiting Gladstone Airport including Victorian-based Cessna 182s VH-IEY and VH-MXL, along with Beech 95 VH-GKB which departed to Redcliffe and then Monto.  Forster Helicopters Robinson R-44 VH-DQA was also noted along with locally-based Mooney M20F VH-WBH.
Posted by Damian F at 9:07 AM