Night Moves and More from Clermont Aerodrome This Week

I've spent a bit of time out at Clermont Aerodrome over the last week, mostly capturing some of the various fly-in fly-out (FIFO) charters that land at Clermont each week.  However, my week of 'fun' started on Monday 4 September when Capricorn Helicopter Rescue Service Sikorsky S-76A helicopter VH-JRD touched down at Clermont Hospital from Rockhampton as "Rescue 300". 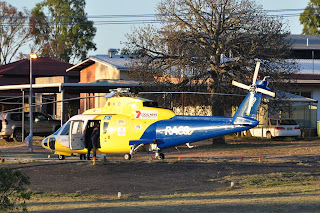 The Jayrow Helicopters-operated Sikorsky doesn't usually fly out as far Clermont, with the Mackay-based Central Queensland Rescue (CQ-Rescue) Helicopter Service usually flying out this way. I believe the CQ-Rescue choppers were operating other tasks, hence the arrival of VH-JRD in Clermont.  It was still a welcome visitor!

My spotting at Clermont Aerodrome began late on Wednesday 5 September when I captured Advance Aviation's new Beech B200 King Air VH-WJK which was preparing for departure to Mackay and then later Emerald. 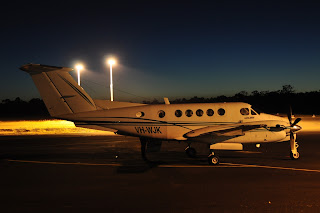 I recently posted a story of VH-WJK that can be found HERE.

Also on the ground was Skytrans Airlines Dash-8-300 VH-QQM which was preparing for departure on a recently started FIFO flight - SKP1829 - to Brisbane.  VH-QQM returned to Clermont early the next morning - again from Brisbane - as SKP1820. 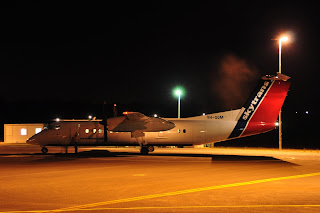 After VH-QQM departed, another Skytrans Dash-8-100 VH-QQI arrived at Clermont after operating the 'usual' SKP872 FIFO flight from Brisbane. 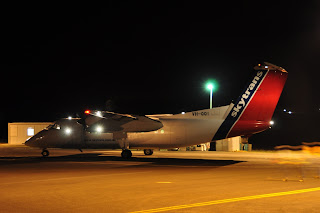 On Thursday 6 September, there were three FIFO charter flights to North Queensland, with two operated by Hinterland Aviation, and one by a Barrier Aviation Cessna 402C - VH-VDK.  Of the Hinterland Aviation charters, Beech B200 King Air VH-HLJ popped into Clermont Aerodrome during the afternoon, while Cessna 208 VH-CVN was photographed just after sunset, as it commenced its taxi for departure to Townsville as HND876. 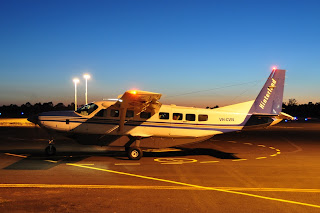 Also that night on Thursday 6 September, the 'usual' five Skytrans Dash-8 FIFO charter flights touched down in Clermont from the Sunshine Coast, Brisbane, and Mackay.  I managed to photograph Dash-8-300 VH-QQN and then Dash-8-100 VH-QQI on the ground that night. 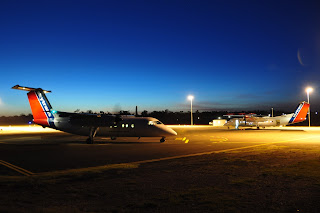 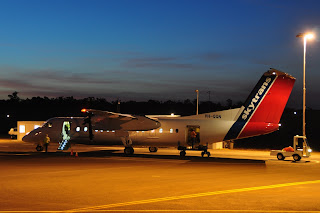 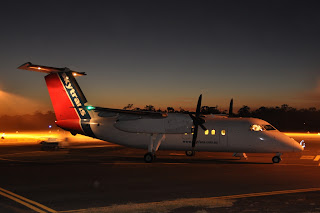