The nice little bizjet arrived into Proserpine from Darwin.  It had earlier arrived into Darwin from Halim Perdanakusuma International Airport, Jakarta, Indonesia.  Looking at the aircraft's flight history, it may be based at Surabaya.

At the time of writing, it appears that N881JC remains parked at Prosie. 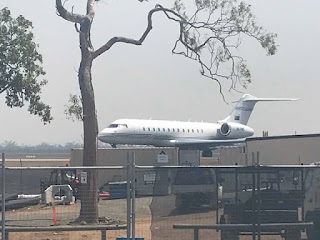 It was spotted above resting on the Proserpine Airport parking apron earlier this week.

Finally, noted visiting Hamilton Island Airport on Tuesday 27 November was Balmoral Air Dassault Falcon 2000LX bizjet VH-WIO.  It arrived from and later departed back to its Bankstown base.

While SFC Farming Raytheon B200 King Air VH-TXT arrived into Hamilton Island Airport on Friday 30 November from parts unknown.  It appears to be staying for at least the night.

UPDATE!  VH-TXT returned to the unknown airport (code:  YDNE) on Monday 3 December.  (Does anyone know which airport or landing area this is?)

Photo taken by Brendan Hamilton  ©
Posted by Damian F at 9:12 AM