On Friday 7 December, Jetstar Airways Airbus A320 VH-XJE finally made its first visit into a Central Queensland Airport, arriving into Mackay Airport as JST886 from Brisbane.  It later returned to the capital as JST887.  VH-XJE then operated the JST830/833 evening service into Proserpine (Whitsunday Coast) Airport also from and back to Brisbane. 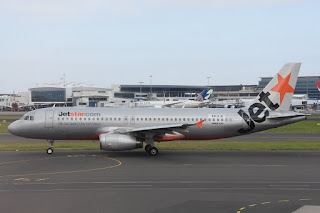 VH-XJE was registered to the airline and entered service in April 2018 – when I photographed it above in Sydney in its first week of service.

VH-XJE has had an interesting history, previously operating in Australia also with Jetstar Airways but as VH-JQW.