Last Thursday 20 December, I popped into the Whitsunday Airport at Shute Harbour and discovered a gathering of Cessna Caravans including a brand new example which was recently delivered to the region.

Whitsunday Air Services / Hamilton Island Air Textron (Cessna) 208 Caravan VH-WHI was photographed after returning to Shute Harbour for the night.  It reportedly is remaining on wheels (rather than floats) and is being utilised on scenic flights around the Whitsundays. 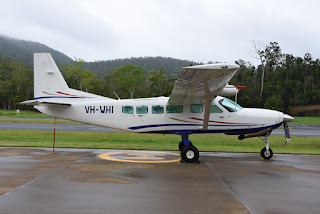 Of interest the 2016-build Caravan was noted arriving into the Gold Coast as N317AG in late September after completing a trans-Pacific delivery flight.  It was registered as VH-WHI in early October and delivered to the region soon after.

Meanwhile, I also recently discovered that Whitsunday Air Services / Hamilton Island Air De Havilland DHC-2 Beaver float planes VH-OHD was sold in August this year and has moved down to Tasmania and taken up operations with Above and Beyond - Tasmania Seaplanes (Airlines of Tasmania).

Whitsunday Air Services / Hamilton Island Air does however, continued to operate De Havilland DHC-2 Beaver float planes VH-OHU and VH-ZDA, along with another Cessna 208 Caravan VH-WTY and a fleet of various make helicopters.

The other Cessna Caravans that I also spotted last Thursday 20 December also at the Whitsunday Airport at Shute Harbour included a pair of locally-based GSL Aviation Cessna 208 Caravans VH-TGX and VH-NGS. 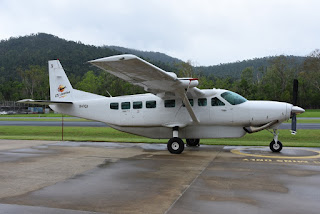 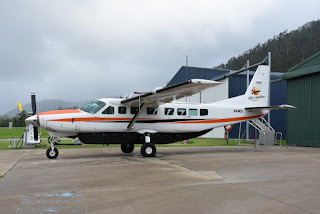 The final Cessna Caravans I spotted was the Wollongong-registered Cessna 208 Caravan VH-DNK which is currently operating for the locally-based Skydive Airlie Beach out of the Whitsunday Airport at Shute Harbour. 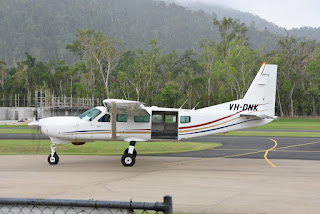 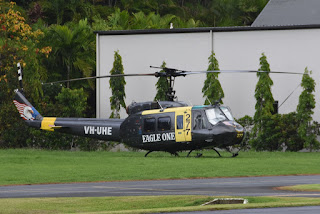 VH-UHE will reportedly completing a contracted heavy-lift role before it will be used for tourist joyflights.
Posted by Damian F at 7:58 PM