An interesting visitor to Hamilton Island Airport as the sun was setting on Monday 17 December with Kefford Corporation (of Victoria) Gulfstream IV-SP N7DK noted touching down from Melbourne (Essendon) via the Gold Coast. 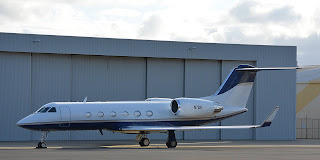 The sleek Gulfstream, which is a familiar visitor to Central Queensland, has recently been re-registered from N810LP and was photographed above in late November outside the hangar at its Essendon Airport base.

After a short time on the ground, N7DK departed Hamo for Sydney.

On Sunday, it arrived from Townsville and departed to Brisbane, while on Monday it did the opposite, arriving from Brisbane and departing to Townsville.

Sincere thanks to Melbourne-based plane spotter Troy H for allowing us to share his photo!