A nice arrival into Mackay Airport on Tuesday 3 December with Albury (New South Wales) based Cessna 525 CitationJet CJ1+ bizjet VH-JSZ touching down from Albury via Sydney. 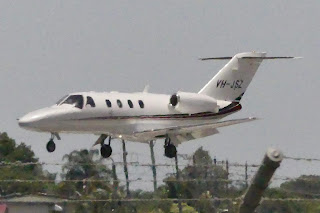 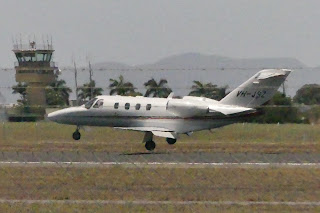 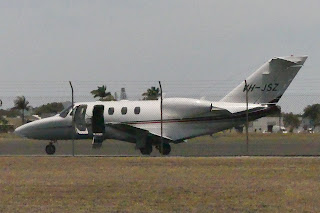 After a couple of hours on the ground, VH-JSZ returned to Sydney and then Albury.

My interest in this registration marking was peaked as I remember this marking being worn by a Dash-8-100 in the early 2000's.  That Dash-8-100 became VH-QQC with Skytrans Airlines in Cairns and then Maroomba Airlines in Western Australia.

And also in the wee small hours of Tuesday 3 December, LifeFlight (Aeromed) Bombardier Challenger 604 bizjet VH-URR "Ambulance 604" was noted visiting Roma Airport from Brisbane.  VH-URR hasn't been in the air for over a month!

While on Monday 2 December, the Queensland Police Service (Airwing) (State of Queensland) Cessna 560 Citation Ultra bizjet VH-PSU was noted calling into Rockhampton and Mackay Airports during a busy day of flying out of and back to Cairns.  It also called into these two places last Thursday 28 November and Friday 29 November.

Finally, very late on Sunday 1 December, Corporate Aircraft Charter (South Australia) Cessna 550 Citation II bizjet VH-ZLE was noted arriving into Charleville Airport from Brisbane.  Then in the wee small hours of Monday 2 December, it then flew to Quilpie before returning to Brisbane.

My suspicions continue to believe that VH-ZLE is operating for LifeFlight on medical evacuation flights.