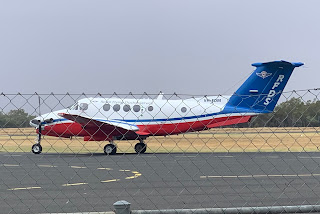 It visited Barcaldine Airport, arriving from Rockhampton Airport via Emerald Airport and later returned to Rocky.

Meanwhile, during the course of this week, fellow RFDS Raytheon B200 King Air VH-FDZ "FlyDoc458" also emerged from the Flinders Aviation paint-shop at Redcliffe in the new RFDS livery before it then departed to Brisbane.


Both VH-FDM and VH-FDZ is the first and second of the 'older' Queensland-based RFDS King Air and Super King Air turboprops to be re-painted into the new RFDS blue and red livery.  Of interest, the RFDS recently took delivery of four new production Raytheon B200 King Air turboprops via Cairns in recent months all in this new livery.  They are registered VH-VJW, VH-VJX, VH-VJY and VH-VJZ.

UPDATE!  VH-FDZ "FlyDoc458" made its first visit to CQ in the new RFDS livery on Thursday 12 December completing a medical evacuation flight from Hervey Bay (Fraser Coast) Airport.  We hope to have photos of VH-FDZ in CQ soon!

Photo taken by Calen Harvey  ©
Posted by Damian F at 7:37 AM