During the middle part of this year, it was announced that Alliance Airlines had acquired five Fokker F-100 aircraft – plus spares – from Swiss carrier Helvetic Airways.  The deal with Helvetic sees Alliance Airlines acquire five Fokker F-100s, as well as all of Helvetic’s spare parts, tooling and engines.  Outside of Fokker, Alliance now has the world’s largest inventory of engines and spare parts. 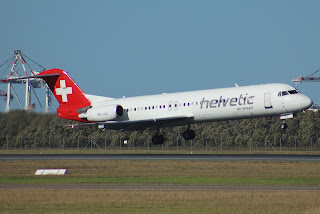 The five F-100s had been stored at Bratislava in Slovakia, since the start of this year and previously spent their operational life flying around Southern Europe from Helvetic’s Zurich base.

Over the last few months, four of the five have made their way to Australia…

HB-JVG touched down first from Bratislava, arriving into Brisbane from Darwin on Sunday 11 August. 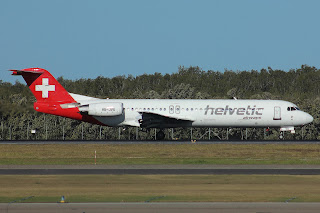 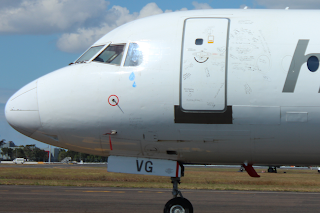 It was subsequently placed on the Australian Aircraft Register as VH-VKP and remains parked at Brisbane. 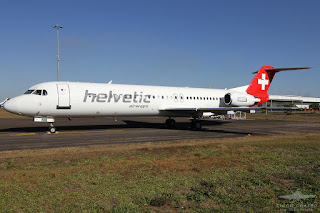 HB-JVF then arrived into Perth from Juanda (Surabaya, Indonesia) on Sunday 8 September. 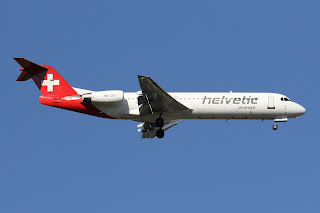 It was subsequently placed on the Australian Aircraft Register as VH-VKO and remains parked at Perth.

HB-JVC then arrived into Brisbane from Darwin and Townsville on Tuesday 1 October. 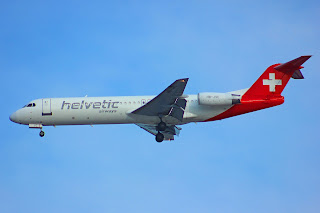 It was subsequently placed on the Australian Aircraft Register as VH-VKQ and remains parked at Brisbane. 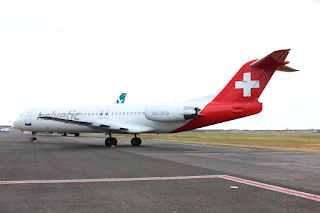 UPDATE!  VH-VKQ flew from Brisbane to Alice Springs, presumably for storage, as UTY9100 on Tuesday 17 March 2020.

And HB-JVE then arrived into Brisbane from Darwin on Monday 14 October. 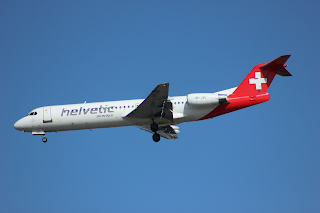 It was subsequently placed on the Australian Aircraft Register as VH-VKN and remains parked at Brisbane.

The fifth F-100 HB-JVH is still due to arrive in Australia although information suggests it has been placed on the Austrian Aircraft Register as OE-IDY to Alliance Airlines Slovakia.

Alliance Airlines is the world’s largest operator of Fokker aircraft. The Netherlands based aircraft manufacturer ceased production in 1996 and Alliance has been busy cornering the market in spare parts, engines and tooling. It is doing so both to ensure the longevity of its own Fokker fleet, but also to build up a lucrative side hustle supplying Fokker spare parts to the 20 plus airlines around the world still flying the aircraft.

And the Dutch made aircraft is well suited to Alliance’s tough operating environment. According to Alliance Airlines’ Chief Executive Officer, Lee Schofield:  "It (the Fokker 100) is a very reliable aircraft and, technically speaking, is perfectly suited for the type of environment we operate in … We fly to places that are remote, hot and dusty, the Fokker 100 does really well there, with its high mounted engines and high reliability. Here in Australia, it is the backbone of the so-called mining fleet".

In 2015, Alliance took 21 Fokker jets off Austrian Airlines’ hands in a USD$15 million deal. Some were on-sold, some kept for spares, and some integrated into the existing fleet. 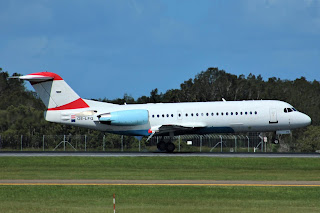 Alliance has also over couple of years, taken delivery two other Fokker jets which will be reportedly used for VIP flights.

Fokker F-100 jet OE-IIC arrived into Brisbane from Europe in December 2017.  It had previously been operated as a corporate aircraft with Austrian-based MJET Business Aviation. Soon after its arrival into the country, it was placed on the Australian Aircraft Register as VH-VIF.  In August 2018, it flew from Albury to Melbourne (Tullamarine) where it seems to have remained parked ever since – with recent photos showing it parked in a hangar without engines. 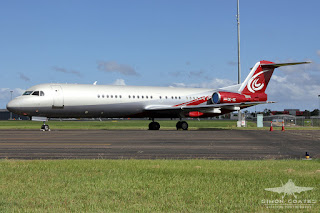 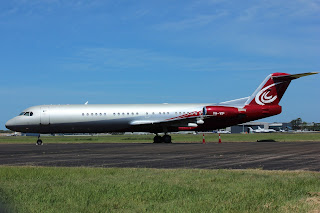 While Fokker F-70 jet PH-KBX which previously flew with the Royal Netherlands Air Force / Government of the Netherlands as a VIP transport aircraft arrived into Brisbane in August 2017.  It entered the Australian Aircraft Register as VH-KBX and looked to finally enter service in May this year.  VH-KBX has reportedly maintained its VIP interior to possibly become Alliance Airlines' new 'corporate charter aircraft'. 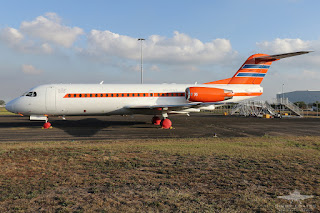 By the end of 2019, Alliance plans to have 44 aircraft flying to mining sites and remote townships around Australia. The fleet will comprise 25 Fokker 100s, 14 Fokker 70s, and five Fokker 50s.

Photos taken by Lloyd Fox, Simon Coates and John Edmond  ©
Posted by Damian F at 8:51 AM