On Saturday 19 December, the visiting Agair Logistics P/L Cessna 525 CitationJet CJ1 bizjet VH-RMB was noted departing Bundaberg Airport.  It looked to fly back to its Stawell base in Victoria suggesting that its 'deployment' to Bundy and Queensland may have come to an end. 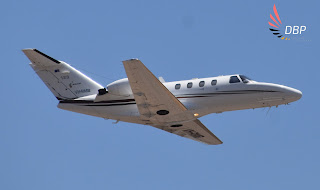 Indeed, it is believed that the Queensland Bushfire Season may also have concluded or is soon to be over.

Furthermore, it appears that this Wednesday 23 December, the visiting Conair Aerial Firefighting Dash-8-Q400MR C-FFQE "Bomber 141" will also depart Bundaberg Airport for good, with a plan showing a departure from Bundy to Cairns and then overseas.

Since its arrival into the region in August, Queensland's own heavy water bomber was utilized on several occasions during the bushfire season. It completed several water bombing runs over to Fraser Island in recent weeks, and was also sent to the South-East corner of the State and up to Townsville to fight fires in these areas.

We hope to see them back again next bushfire season!

Thanks to all the crews and other personnel for their hard work over the bushfire season!
File photos taken by Dan B  ©
Posted by Damian F at 8:17 PM