Alliance Airlines Fokker F-70 VH-QQY Out of Storage and Back at CQ Airports - UPDATED!

This posted has been UPDATED with a current photo! 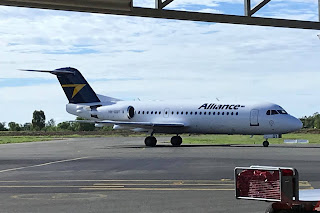 Interesting to note on Sunday 27 December that Alliance Airlines Fokker F-70 VH-QQY operated flights for the airline into both Proserpine (Whitsunday Coast) and Gladstone Airports.

Interesting in that VH-QQY was - what I thought - still in storage at Alice Springs in the Northern Territory. But no!

Research reveals that VH-QQY departed Alice Springs for Cairns on Sunday 4 October and has been stored there until Tuesday 22 December when it ferried into Brisbane as UTY9103.

As shown above, VH-QQY had been stored at the Asia Pacific Aircraft Storage (APAS) facility at Alice Springs Airport since arriving there in early April.

Of interest, a further two other overseas operated aircraft have also recently left the APAS facility although there still remains over 100 aircraft stored in the Australian desert.
UPDATE!  Meanwhile, into the New Year, VH-QQY continues to operate for Alliance Airlines on scheduled passenger and Fly-in Fly-out (FIFO) charter flights as shown above when it arrived into Emerald Airport from Brisbane on Monday 11 January.
A massive thanks to Brendan yet again for his continued support of the CQ Plane Spotting Blog and for allowing us to share his photo of VH-QQY which he captured during a helicopter flight over the APAS Facility at Alice Springs Airport.  Check out more great photos on Brendan's own plane spotting and travel Blog - named BMB Photography - at:  http://madaboutplanes.blogspot.com.au/
All photos taken by Brendan Berry  ©
Posted by Damian F at 1:26 PM