It looked to fly up from and then later return to Brisbane.

UPDATE!  On Wednesday 23 December, VH-PYN looked to again visit Hamilton Island Airport, this time flying in from Brisbane via Swan Hill (Victoria) and Wagga Wagga (New South Wales).  It then returned to Brisbane.
UPDATE!  On Thursday 24 December, VH-PYN called into Hamilton Island Airport for the third day in-a-row, again arriving from and later departing back to Brisbane.
Meanwhile, on Tuesday 22 December, Brisbane-based Pesca Aviation AeroCommander 690-A Turbo Commander VH-ATF was spotted as it visited Rockhampton Airport from Archerfield. 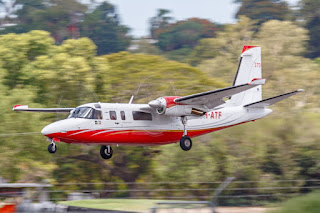