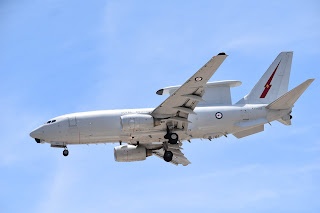 It was flying as "Wedgetail 01" and came up direct from RAAF Base Williamtown to Hamo. After the airwork at Hamilton Island Airport, A30-005 continued further North and was spotted above arriving into Townsville.
Of interest, also on Tuesday 15 December, fellow RAAF Boeing B737-7ES / E-7A Wedgetail Airborne Early Warning & Control (AEW&C) aircraft A30-006 "Mitchell 02" also flew up from Williamtown to land at Townsville, flying via inland Central Queensland.
Photo taken by Graham Aspinall  ©
Posted by Damian F at 8:44 PM