Making a rare visit to Central Queensland on Friday 18 December was Alliance Airlines Fokker F-70 jet VH-KBX.  It was spotted on the ground at Emerald Airport shortly after arriving on a closed Fly-in Fly-out (FIFO) charter flight as UTY4584 from Brisbane. 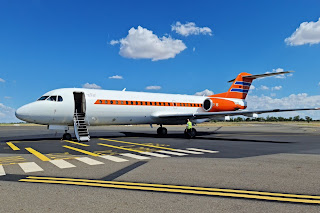 It later returned to the capital but as UTY4585.
As we've mentioned previously, the Fokker F-70 jet VH-KBX previously flew with the Royal Netherlands Air Force / Government of the Netherlands as a VIP transport aircraft and carried the Dutch registration marking of PH-KBX.  It arrived into Brisbane in August 2017 and entered the Australian Aircraft Register as VH-KBX soon after.  VH-KBX looked to finally enter service in May 2019.
Meanwhile, also on Friday 18 December, Alliance Airlines announced that it has acquired an additional 16 Embraer E-190 jets.  All aircraft were previously flown by American Airlines and will keep their two-class 99-seat cabin configuration.
The aircraft will be delivered in the coming eleven months, with five due for delivery this month and then one per month until November 2021.
The 16 E-190 jets are part of the airline's expansion and fleet renewal strategy.  Previously the airline acquired 14 former COPA E-190s, of which the first was recently delivered into Brisbane.
Alliance Airlines expects to add the E-190 jets to their network in March 2021.
Photo taken by 'AC'  ©
Posted by Damian F at 8:25 PM