Certainly sad to see on Wednesday 23 December that the resident Canadian-based Conair Aerial Firefighting Dash-8-Q400MR C-FFQE departed Bundaberg Airport on the first couple of legs home after its first deployment to Queensland where it was contracted to be the State's own heavy water bomber for the recently completed bushfire season. 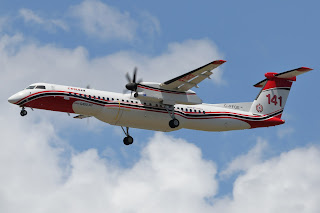 C-FFQE was heard to be using the radio callsign "Fireguard 141" and was spotted above as it passed through Cairns Airport.  It then departed the country and continued up to Guam.
The Conair Dash-8-Q402MR, C-FFQE (msn 4325), arrived into Bundaberg Airport in late August after flying all the way from its Abbotsford base in Canada via stops in Oakland, Honolulu, Majuro, Honiara and Brisbane.  The Dash-8 was originally built in 2011 and was acquired by Conair early in 2020 and converted to a fire bomber.  Its maximum tank capacity is around 10,000 litres (2,642 US gallons).
As "Bomber 141", C-FFQE completed several water bombing flights from Bundaberg Airport to parts South and North in the State, and most recently, over Fraser Island.
Photo taken by Jonothan Williams  ©
Posted by Damian F at 8:41 PM