On Wednesday 30 December, QantasLink (Cobham Aviation-operated) Boeing B717-200 VH-NXR made its first visit into Central Queensland only days after returning to Australia after it was re-painted into the new Qantas / QantasLink 'Silver-Roo' colour scheme. 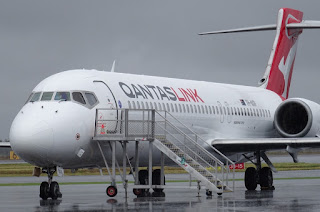 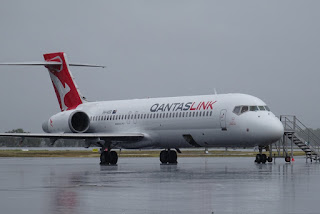 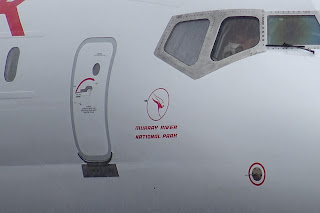 It called into Rockhampton Airport while operating the QJE1792 service from Brisbane. It appeared to then suffer a maintenance issue and departed back to Brisbane after dark as QJE6203.
VH-NXR underwent planned maintenance at Singapore (Seletar) Airport during November and December and it is believed that while it was there, it was re-painted into the new Qantas / QantasLink colour scheme. VH-NXR ferried back to Australia at the start of this week and is now the thirteenth of the fleet of Cobham Aviation-operated Boeing B717-200 regional jets to wear the new and updated Qantas livery and kangaroo logo, which was introduced to coincide with the introduction the Boeing B787 Dreamliner into service with the airline in 2017.

It also appears that the previously un-named VH-NXR has now been named 'Murray River National Park'.

Of interest, VH-NXR has had an interesting history to the present day. The Boeing B717-2BL (c/n 55168-5118) was originally ordered new in 2003 by Midwest Airlines, Milwaukee, Wisconsin in the USA and was entered onto the US Aircraft Register as N904ME in April 2003.
It operated with the airline until 2009 and was stored at Victorville soon after.  Subsequent leases were not taken up and the B717 eventually ferried to Miami, Florida in November 2011 where it was prepared for lease to Qantas Airways.  It then departed to Australia, arriving in Adelaide in early April 2012.
It was then registered VH-NXR with National Jet Systems (now Cobham Aviation Services) as the registered operator.  VH-NXR operated its first QantasLink revenue service flying as QJE1806 from Perth to Paraburdoo in May 2012.
Photos taken by 'AC' and Ryan Hothersall  ©
Posted by Damian F at 10:49 PM