As mentioned below, on Monday 14 December, Austrek Aviation Beech B200 King Air VH-WXO landed at Maryborough Airport from Bankstown and Canberra before then departing and spending the night at Rockhampton Airport.  It was photographed below by local plane spotter David G on a damp Maryborough Airport apron. 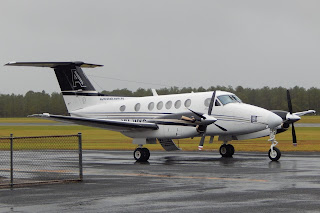 Then on Tuesday 15 December, VH-WXO departed Rockhampton Airport for Bundaberg Airport before then later departing there back to Canberra and then Bankstown.
Also on Tuesday 15 December, the visiting SFC Farming Raytheon B200 King Air VH-TXT departed Bundaberg Airport for Mundine.  It had arrived from there the previous day.
And also on Tuesday 15 December, Brisbane-based Hewitt Cattle Australia P/L SOCATA TBM 700 VH-PGA flew into Rockhampton Airport from Moura Airport before then heading North to Charters Towers Aerodrome.  After a short while, VH-PGA returned to Rocky and appears to be staying for at least the night.
Photo taken by David Geck  ©
Posted by Damian F at 8:24 PM