Interesting to note across that Saturday 12 December and Sunday 13 December, Virgin Australia Boeing B737-800 VH-VUC looked to depart Australia for good from Brisbane and Darwin (pictured) on what appears to be a flight back to it lessor.  It landed at Clark International Airport in the Philippines. 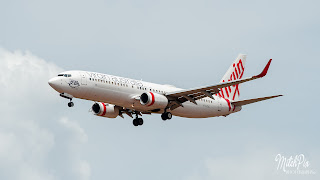 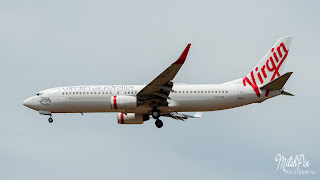 UPDATE!  On Sunday 17 January 2021, VH-VUC ferried from Clark to Jinan Yaoqiang International Airport in China.
UPDATE!  VH-VUC has subsequently been re-registered 2-VVUC and flew from Jinan Yaoqiang International Airport to Yichang Sanxia Airport also in China.
VH-VUC has had an interesting history with it originally ordered new by and registered to Virgin Blue in October 2004. It was accepted by Virgin Blue and delivered to Australia via Brisbane in mid October 2004. The aircraft was named 'Foxsy Rock'sy'.

VH-VUC operated its first flight for Virgin Blue at the end of October 2004.

During 2020, VH-VUC spent a short time in storage from March to June with it then re-entering service until Friday 28 August when it was finally withdrawn from use and placed back in storage at Brisbane.
The final time that VH-VUC visited Central Queensland was on Tuesday 4 August when it visited Mackay Airport twice as VOZ605/610/613/616 each time arriving from and departing back to Brisbane.
As mentioned above, VH-VUC departed Brisbane on Saturday 12 December on the first leg of its final flights out of Australia.
Photos taken by Sid Mitchell and Steve Vit  ©
Posted by Damian F at 10:13 PM