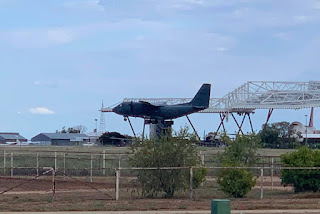 Spartan A34-002 as "Wallaby 16" looked to fly up from RAAF Base Amberley to complete airwork around Bundaberg Airport.  It later returned to Amberley.
While A34-009 as "Envoy 10" was photographed (above) as it landed at Longreach Airport after completing airwork in the area.
It also appears that A34-009 is staying at Longreach Airport for the night.
Photo taken by Greg Weir  ©
Posted by Damian F at 9:05 PM